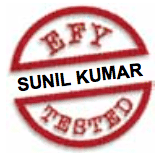 Digital wall clocks, table clocks and desk clocks with pointer or LCD display are readily available in the market. Here we present a microcontroller based clock using AT89C2051. Additional feature of the clock is that the time display is visible even in the dark.

Port pins P1.7 down through P1.1 of the microcontroller are pulled up with 10kΩ resistor network RNW1 and connected to input pins 1 through 7 of inverting buffer IC2, respectively, to provide segment data for the seven-segment display. The display shows the time as ‘hour.minute.’ Flashing of decimal point (dp) on DIS3 indicates the seconds. The decimal points for DIS1 and DIS2 are not used here. 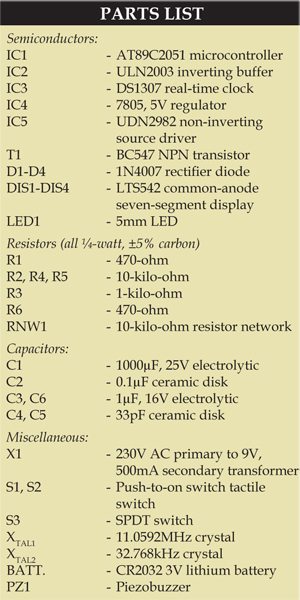 The display and alarm are controlled by microcontroller AT89C2051. Data is transferred between microcontroller AT89C2051 and the RTC using two wires (which form the I2C bus), one of which serves as the clock line (SCL) and the other as data line (SDA). The four subroutines required for data transfer are the send-start condition, send-stop condition, read-a-byte and write-a-byte. Using these subroutines, the time of the day can be written into internal registers of the RTC at address locations 00H through 06H (refer the datasheet). The address of the control register is 07H. If it is written with control word 10, a 1Hz square wave is available from pin 7 of the RTC. The pulse output at pin 7 drives pin 5 (dp) of DIS3, which blinks every second.

The RTC is driven by an external 32.768kHz crystal. A 3V battery is connected at its pin 3 along with 1μF capacitor for battery backup. Pins 5 and 6 are pulled up to 5V by resistors R5 and R4 and connected to pins P3.1 and 3.0 of the microcontroller, respectively, for serial communication between the RTC and the microcontroller.

To derive the supply power for the circuit, the 230V, 50Hz AC mains is stepped down by transformer X1 to deliver a secondary output of 9V, 500mA. The transformer’s output is rectified by a full-wave bridge rectifier comprising diodes D1 through D4, filtered by capacitor C1 and regulated by IC 7805 (IC4). Capacitor C2 bypasses the ripples present in the regulated output. LED1 acts as the power indicator. Resistor R1 acts as the current-limiter for LED1.

An actual-size, single-side PCB for the microcontroller-based clock using DS1307 is shown in Fig. 3 and its component layout in Fig. 4.

To set the alarm time, press switch S2 connected to pin P3.2 of the microcontroller and keep it pressed until the display changes and reaches the required alarm time, say, 7:30. Now connect the pole of SPDT switch S3 to Vcc momentarily (which makes pin P3.3 of the microcontroller high) and bring it back to the initial position. Immediately, the alarm sounds for a minute. The alarm time is thus set at 7:30. 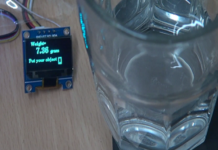 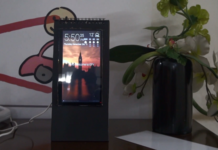 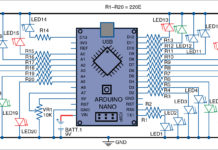